I am going to start off with a flashback from last season:

August 29, 2013
Today l was sitting in the lift hut on top of the small beginners run, looking at some showers over a distant valley, thinking about the forecast for the coming week when the following poem came to me:

Grey clouds gathering above,
surrounding us with warmth and love.

Sending down some precious rain,
while I am wishing here in vain

for the cold air to return real soon,
to cover our hills once more in a fluffy white cocoon.

This was the last day of that run being open for the season that ended in a fizzle for most Australian resorts with some closing a week prior to the end of the official season, which is normally the last weekend of September, due to lack of snow.

I had been enjoying working on this beginners run for 6 years now and knew what was coming, but tried to stay positive. Over the years I had dropped a few hints here and there on how snow making would make the run much more reliable for a large group of customers, that preferred the family atmosphere there, to the much larger and more crowded main resort. These hints were generally met with comments similar to the well known flying pigs one… In other words, the resort had a lot of other priorities to spend money on, before this was even a consideration.

Why is there a hole in the ground?

Easter this year, while up there to make preparations for Winter, like getting fire wood and cleaning the house, I went past the run to have a look if anything had changed. I noticed that someone had dug a big whopping hole, below the lower lift hut, right next to the fire hydrant connection! I could not help but wonder and hope. Was this a sign of preparations for snow guns to be installed?

Shortly after writing the above poem and thinking about how snow guns would have made my job easier and more reliable over the last few months, I had a conversation with a local council member about the possibility and talked about the positive impact I expected from having snow guns on the continuity of customers and revenue. This conversation was suddenly met with a little more hope raising response than any of my previous ones on this topic. 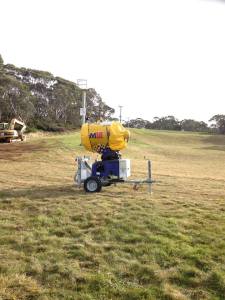 A few weeks back my attention was drawn to a post on Face Book, in which the announcement was made that confirmed my suspicions. The snow guns had arrived! I felt extremely exited! I am eager to find out what the coming snow season has in store and am so glad we now have snow making for everyone to enjoy!

It is difficult to prove what had changed, that all of a sudden people in charge decided that snow guns are an important asset for the revenue of the small slope, but I can’t help but wonder if my thoughts and poem had something to do with it. Was it just wishful thinking? Or can thoughts, like the ones mentioned in this story, actually become a reality? Through my own multiple experiences with this phenomenon, I have become convinced this is the case. Please share yours in the comments below. I am glad I never gave up on my dream to create better conditions for everyone on “my beloved ski run” and am looking forward to the coming season.

8 thoughts on “Why I am exited about the coming snow season!”