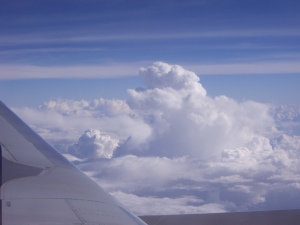 “Our plane got cancelled due to a mechanical defect and now we have been waiting here for another flight since this morning.” a couple of young Australian travellers told me, when I ran into them waiting for my connecting flight to Europe at the airport in Kuala Lumpur on March the 8th., earlier this year. I was travelling by myself to visit my family and friends, so to make the wait a little more entertaining I normally like talking to fellow travellers.

The next thing they told me was even more worrying: “Glad they cancelled, because they lost another plane today.” I am sure my eyes widened as far as they could from the shock of this news as I uttered something like OMG! This was NOT something I wanted to hear in my position of having another 13 hour+ flight ahead of me. Immediately I realized how lucky I was, having arrived here in one piece on Flight MH 148, while at the same time Flight 370 went missing. I was struggling to keep my mind from picturing what those people went through or what happened, knowing that this would not help them or me at all. I managed to direct my thoughts to silently hoping they would be found somewhere safe and well. I also thought what are the odds of it happening twice in a day with the same airline? This gave me a little more peace of mind as I queued up for my next flight.

The line had built up massively since the last half hour and was moving only inches at a time. I supposed they immediately had tightened security after the earlier incident, so I waited patiently shuffling along with the crowd for about 20 to 30 minutes before entering the packed Boeing 777.

I thought I had secured a seat on the window side, next to the path, when I booked my flights. I liked to be able to see out and get up whenever I felt the need to stretch my legs, without having to disturb others that might like to sleep. I started feeling very disappointed and confused when the staff directed me to a seat in the middle isle wedged between two strangers. Thoughts of “why is this happening to me?” started creeping in. Then it dawned on me, that the lady at the travel agent had said something about not being able to book seats on some of my flights as I tried to make sense of it all (Later I found out that it was possible, but only 12 hours prior). I decided that this was not going to ruin my trip and to look forward to whatever pleasant surprise this could unfold into.

I put my hand luggage in the designated compartment and sat down. I observed the man already seated next to me. He appeared to be a businessman going by his choice of clothing. From the way he was clutching his laptop bag, I could tell he was nervous. What was he nervous about? Flying? Someone stealing his laptop? I never found out, because he immediately gave me the vibe he did not want to talk and sleep the whole way.

Next, my other neighbour arrived. She seemed the opposite to the man next to me with a friendly face and a short bob haircut. She told me she did not mind getting up for me if I needed a stretch and to let her know whenever I felt like it. We started chatting and found an amazing amount of common ground to talk about. She felt very scared, every time we encountered turbulence and the plane would drop a bit. She grabbed my arm in fear so I offered to hold her hand and told her about my (unusual and very personal) way of dealing with that fear, which is (in my mind) asking my deceased uncle to guide the pilot safely to our destination. My uncle had been doing this in his profession throughout his life as the technician looking after all the instruments in similar planes and had safely retired, long before passing away only a few years ago. It seemed to give her a little comfort too, seeing we were stuck on the same plane.

We exchanged some interesting ideas to look into after the trip and it was only after many hours we realized that we should try and get some sleep to not arrive completely exhausted. I am sure she was very pleased to have spend the journey next to me and I felt the same about her. She told me how surprised she was at the fact that we talked for hours, because she travels a lot on her own and normally this does not happen to her. If I have to sit next to a stranger for 13 hours again, I hope to have another experience like this one!

I know now that if it had not been for me taking control of my feelings and thoughts, steering them into the direction of wonder and anticipating a positive experience, it would not have been such an exciting journey. I am glad I arrived safely and added another pleasant memory to my life. Have you ever had experiences like this? Please share in the comments below.